Fran Breen
Even thinking of him makes me smile. I have great memories of working and being around Red. First thing that comes to mind is that voice! You just couldn’t forget it. Big, powerful. So powerful – when you heard it – it just changed you. From Jelly Roll Baker to It Ain’t the Spotlight.  He was the blues. Born and bred in Ireland. Homegrown. The real thing. I have a great fondness in my heart for this man. Thank you, Mr. Red.

Kevin Conneff
The Cana Inn was one of the pubs on what is now the Stephen’s Green Centre side of South King Street in Dublin 2 and it was there in the late 60s that I first heard Red Peters sing. If I’d close my eyes I could let that powerful voice transport me to Leadbelly territory – except for the Tipperary accent that came through and the fact that, as far as I knew, Red hadn’t spent years in jail for murder! The voice and delivery were unforgettable and even then I couldn’t help imagining what that voice could do to some of the great arias. Later, when I got to know Red I discovered that he too was a great admirer of Caruso, Gigli, McCormack and others. Over the years, in Slattery’s of Capel Street, Moran’s Hotel, Poulaphouca and at parties here and there I had the pleasure of hearing Red belt out Blues, Rock, R+B and soul like no other Irish singer had ever done. Red could have gone professional and, I’m certain, become known worldwide. But he chose not to and instead stayed in the day job. Apart from his amazing singing, Red was witty and entertaining – truly great company. I feel honored and privileged to say: “he was a friend of mine.” 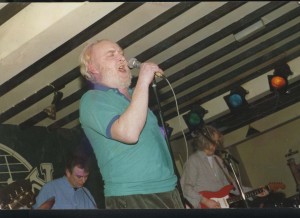 Pat Farrell
I was down in the Irish Blues Appreciation Society in Slattery’s many moons ago. Larry Roddy was there with his tape recorder, playing tapes and telling us about the likes of Blind Lemon Jefferson, etc. He then introduced some “live” music and from the stairs, I heard this most incredible voice.  The voice belonged to the one and only Red Peters and I was completely blown away…  Some years later, I was to have the privilege of playing with Red’s Band and we had many years of friendship, fun and playing so many gigs that I will never forget. We were once asked to play at a wedding, even though we were not your typical wedding band. As soon as we started to play, people began fighting their way towards the exit, as if the fire alarm had gone off! When we had finished, there was hardly anyone left in the room and Red turned around to me and said, “I’m in good form tonight!”.  I learnt so much from Red over the years and I feel so lucky to have known and played with such a gentleman. As he would have said to Declan “Jump On It! “.

Chris Meehan
My earliest recollection of hearing Red sing is on a balmy summer’s evening in the mid to late ‘60s. I had gone to the Cana Inn as I’d heard that the house band – which featured Alec Finn (later of De Danaan) – sounded like the Memphis Jug Band. Red was on vocals, eyes closed, head back, penetrating the fog of cigarette smoke that hung over the room with a bluesy voice as clear and authentic as if he’d just stepped off a chain gang.
Over the ensuing decades, as Red became a firmly established figure on the Dublin music scene, our paths would frequently cross. Whether it was at his residencies at Slattery’s, Moran’s Hotel or the Meeting Place and whether he was part of a duo with the late Brian Fry, an acoustic group such as the Dirty Dozen or a hot electric band like the Floating Dublin Blues Band. One can glean from the above that Red wasn’t slow about changing venues – or bands for that matter – if he felt things needed freshening up. I was the beneficiary of some of those shake-ups as I got to play keyboards with him and his legendary sidekick on guitar, Jimmy Faulkner, sadly like Red gone too soon, firstly with the Medium Wave Band and some years later in a residency at the Harcourt Hotel.
Although health problems dogged his later years which prevented him from performing in public, it was wonderful to see Red take to the stage of the Button Factory a few years ago as part of a tribute to him, put together by the late Larry Roddy. The applause of a packed house must have left him in no doubt as to the great impact he had left on people, as well as the deep affection in which he was held. As he took the microphone to sing, his voice – at first faint and feeble – grew in strength like a fire that had been rekindled, rolling back the years and bringing us with it to happier times and other stages. That, I think, is the memory I will cherish the most.

Johnny Moynihan
I guess the first time I heard Red was when we used to show up at the same parties. That was so long ago that there weren’t any gigs and the Cana Inn sessions hadn’t started up. He’d be singing songs like Corrine Corrina and me Van Diemen’s Land or such. It seems to me there weren’t any instruments. I can still see him standing there with the head thrown back, horsing out the song. There was power and feeling in the delivery and fine tradition in the material. Later, as he gathered like-minded musicians about him, his gigs attracted many of us “Ethniks” as Jimmy Faulkner used to call us.
Apart from his music, Red was always an affable and amusing man to meet. I fondly remember an occasion when Imor Byrne, Clive Collins and myself repaired to Red’s flat for late-night refreshments. Red was telling us stories about characters he knew back home in Tipp and this amazing thing happened. As we sat spellbound, Red went from raconteur to “two-man play”. On the left was a respectable Bank Manager/Chamber of Commerce/Confraternity worthy; in the opposite corner, a dissolute ne’er-do-well – The Town Drunk. As dialogue shifted from one to the other, Red moved swiftly from left to right with a rapid change of character: specs off, hair unkempt, jacket hanging askew off the shoulders and a totally different bearing. To and Fro. A superb five minutes of comedic theatre with no time lost for the many costume changes.
The hilarity continued when we noticed a long bamboo pole hung on the wall. Red revealed proudly that it was a memento of  a pole-vaulting championship that he’d won in more athletic times (I believe he was a handball champ also). So he decides to demonstrate the quality of the pole by setting the far end of it into the angle of floor and skirting-board and arching it from the other end. As he flexed it, extolling its virtues the while, it suddenly exploded into dusty fragments. My, how we did laugh!
His likes? Neither again nor before.